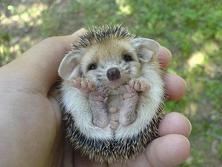 Echidnas are one of the oldest surviving mammal on this planet today. Echidnas lay one egg at a time which hatches hairless and blind after 10 days. They then hold onto their mother’s hair in her pouch and suckel. After two to three months the echidnas start to grow their spikes, their mother then removes them from her pouch and digs it a burrow but they still comtinues to suckel for the next 6 months.


Echidnas are classified as ‘common’ and are not on the endangered list. Echidnas are not territorial and are found all over Australia in, forest, woodlands, grasslands and arid zones. They are able to survive in different extreme temperatures which is why they are perfect for Australia. Echidnas use their snout and claws to break into ant and termite nests and captures them by sticking their long sticky tongue in and out.


Echidnas have had natural predators their whole life, mainly reptiles such as snakes and large lizards like Goannas which are the main killers of both echidnas and their young. Study shows there are other recent killing of echidnas by cars, dogs, foxes, pigs and occasionally the young is taken by cats.


Echidnas have many disease that they can catch but Pox (mainly found in captive echidnas) and flat worms (wild echidnas) cause the most natural deaths with an average age of 10 years in the wild but there is to be know of an echidna living up to 45 years old!


The scientific name for and echidna is Tachyglossus Aculeatus they are also called Monotreme which means egg-laying mammal. Echidnas have a close relatives (the long-beaked echidna) in New Guinea. Here are some pictures below to see the resemblance.

Bottle brush are grown all over Australia but preferably in moist or wet soils. These flowers attract native Australian birds and come in a variety of colours. They are long living, plants that come extremely handy. It gives off a citrus odour and blooms flower around late spring/autumn each year.


This plant is native in Australia and are susceptible to fires but is able to regenerate if the ground above is destroyed. The Hakea Flower are small shrubs that can become small trees which bloom in winter and spring. The flower contains spiky leaves which restricts wild animals from killing it. It attracts bees and bug alike which helps to pollinate it.


This is a type of plant which is based in South-west of Western Australia. They are small shrubs and grow small white flowers. If torn or crushed it creates a peppermint smell.


The golden wattle is Australia's floral emblem. It is an evergreen, which spreads small trees or shrubs. It grows in open shrub, woodland and forest environments in South Australia, Victoria, New South Australia and
the ACT. The flower displays Australia's national colours Green and gold and is a symbol of unity.

A dingo is a wild dog found only in Australia except for the state of Tasmania. They don't bark unlike other breeds of dogs, but they howl. They are usually medium sized with a red, orange fur coat with a fluffy tail.

The Dugong is a large sea mammal found in the northern coastal waters of Australia. They are said to have a lifespan of 70 years. Unfortunately the Dugong species are on the brink of extinction.

Emu are on the Australian coat of arm with the Kangaroo. Emus live from 10 to 20 years living from costal regions to snowy mountains. There has been species of emu that have became extinct, The species where dwarf and on Kangaroo Island.


Koalas are found in Eucalypt forests and lightly wooded areas from South-East Queensland to South-East South Australia. They eat eucalyptus leaves and live in the highest branches of the tree. Koalas are really docile animals except when teased or frightened.